Coming to a Conclusion

I have come to the conclusion that awareness is everything. This isn’t a new idea. In fact, it is ancient. However, it is the way events unfold in our lives that determines our familiarity with and acceptance of ancient principles and truths. My experiences the last couple of years have forcefully reminded me that you can’t solve a problem if you aren’t aware of it in the first place.

I fell into an emotional crater after my mother’s death. However, one day, I realized there were only two choices, stay in the crater or climb out of it. This awareness prompted action. Digging out of the crater left by my mother’s death never felt special, unique or heroic. Plenty of times, I wanted to stop but that meant hanging onto the side, which was a precarious place. Come to think of it, I just named another choice. So maybe there were three: stay in, hang onto the side or climb out.

I held onto the side more often than I can count. It required a lot of energy. In fact, hanging on sometimes took too much. Those were the moments when it was like a scene out of a movie. You know the one I’m talking about. The protagonist has fallen over a cliff and landed on a ledge barely wide enough to sit on. There is a solitary branch growing out of the cliff wall. Since it is the only thing the protagonist has to hold onto, she does.

Hanging on was difficult, but those moments also gave me time to catch my breath so I could keep going. Perhaps that is the essence of the grief process, finding places to rest before continuing the climb out of the crater. I will always miss my mother, but the tendency to well up with tears has diminished. Now, I’m in a place where I can look both behind and ahead and see that the most horrible part is behind me.

Growth occurred along the way whether or not I wanted it. I think the kindest and most important thing I can do for myself is acknowledge and accept how far I’ve come. This understanding brings the awareness that unknown craters lie beyond this one. However, I’ve climbed out of this particular one and see the horizon beyond it. If I can get through the pain of this horrible loss, then it doesn’t matter how craters lie beyond me. Each one will bring the same choice of staying in and climbing out.

Also, I’m aware that each crater is accompanied by a horizon. I’ve learned there is something special about horizons. They are multiple and kind of magical. Basically, as long as you believe you will see another one, as long as you trust another one will be there, then it will be. I have come to this conclusion.

As published in Luminous Wisdom Magazine
May 2018 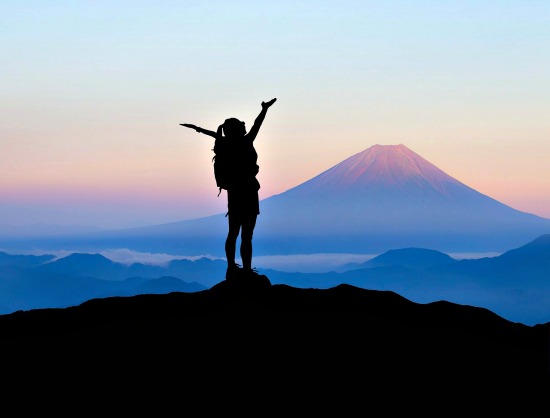