Memories In My Hands

My dad was a big man. That’s why, in high school, the football coach told him to try out for the team. W.A. (Weyman Alexander) loved the game. He earned a scholarship to play football at an engineering college where he was taught to print in sturdy, even capital letters. However, he was a liberal arts soul who earned a technical degree. He’s not the only person this has happened to and it wasn’t a bad thing. He was a first-string player and, after graduation, his career took him from teaching to insurance sales to the financial industry. One morning, I needed a note because I was late for school. He took a pen out of his pocket and wrote my note in beautiful, black flowing cursive. I was so surprised!

I was accustomed to his printing and had forgotten he could write in cursive too. Plus, I had never seen this pen. When I asked about it, he said, “Oh, it’s just a little something I bought for myself.” It would have been in character for him to let me try his pen, but I have no memory of writing with it. What I do remember is how the pen looked in his hand. I didn’t know it then, but his pen was a Montblanc.

Fast forward about ten years. My mother, Norma, and I were in Munich, Germany. W.A. had died. Norma had gone back to school, gotten a job and was dating Ted. During the trip, she had been looking for a gift to take to him. On our last day, we wandered into a store that sold Montblanc pens. At the time, I could converse with the salesperson in German about the pens and explain the differences to Norma. Ted became the happy recipient of a Montblanc.

Fast forward. Norma gave me money for my birthday. I purchased a turquoise Lamy Safari and ink cartridges and began practicing purple cursive.

Fast forward again. Ted had died and Norma asked me if there was anything of his I wanted. I remembered the pen. “Do you still have his Montblanc?”

“Yes. It’s in my desk,” she said. I brought it home, and thanks to The Goulet Pen Company’s YouTube videos, I flushed it and filled it with Pelikan 4001 Turquoise ink.

A couple of months later, Norma called me. “Guess what? That pen you have isn’t Ted’s. It’s your dad’s.”

“Because I found Ted’s in his desk.”

“Yes, I’ll bring it to you when I visit again.”

The piston in Ted’s Montblanc was stuck and I was having ink flow problems with W.A.’s pen. Fortunately, there is a Mont Blanc store in town. I took my pens there and found out several things: I possess two, vintage Montblanc Meisterstück (Masterpiece) pens, it’s best to use Mont Blanc ink and Ted’s pen required a necessary but easy repair.

After I got Ted’s pen back, I ordered a fountain pen stand for my desk. The care, maintenance and use of fountain pens is a fascinating learning curve. I write with mine every day. This means I literally hold memories in my hands: of two different but wonderful fathers and of my lovely, fiercely independent mother.

The other day, my husband said, “You have four fountain pens now. Is that enough?”

I smiled and pointed to my fountain pen stand; it holds eight. Four more to go. I wonder what memories they will bring into my hands? 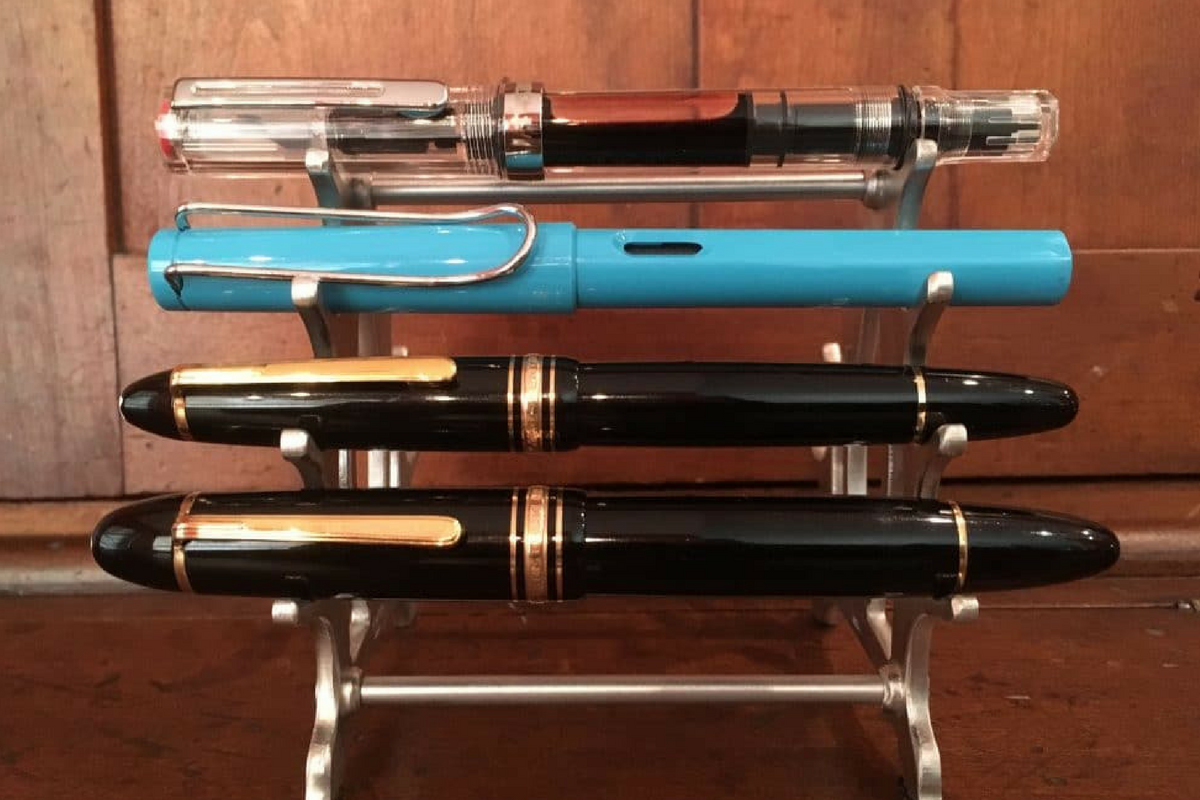