My father, W.A., stood slightly under six feet. He had a muscular, powerful physique. He played football in high school and college, usually tackle or guard. You wouldn’t think such a big man would be a good swimmer, but he was surprisingly graceful and strong in the water.

During the summer of the beach house, W.A. would sometimes take me, my sister and my cousins one-by-one out beyond the big breakers. We would float on our backs, tethered by holding hands. We felt totally safe with him. It was lovely, relaxing on those huge, gentle waves as they lifted us up and down, up and down. I always wanted to stay longer, but my sister and cousins waited in the surf for their turns.

One day, a big rainstorm came in the afternoon. It soon passed and the next thing we knew, an enormous rainbow arched over the ocean, right in front of our house. One end plunged right into the water where my dad took us. I figured I couldn’t ride a searchlight beam, but I could get to the rainbow. Knowing he could easily do it, I begged him to take me to its end. (It was like the way I begged him to pick me up so I could touch the chandelier.)

He didn’t. I don’t remember why, but he probably just wasn’t in the mood, didn’t want to get wet or maybe more rain was in the forecast. Maybe he understood, as I didn’t, that we’d never find the rainbow once we were in the water. Anyway, guess what happened?

“There isn’t a pot of gold out there, Jeannie,” he teased. “If there was one, it has sunk by now.”

This amused everyone but me. I didn’t know how to explain that I wanted to be in the lights and wanted to see their colors on my skin. Instead, the memory of this longing led to the idea of my Valkyrie being not only the choosers of the slain, but also the lights of the aurora borealis. 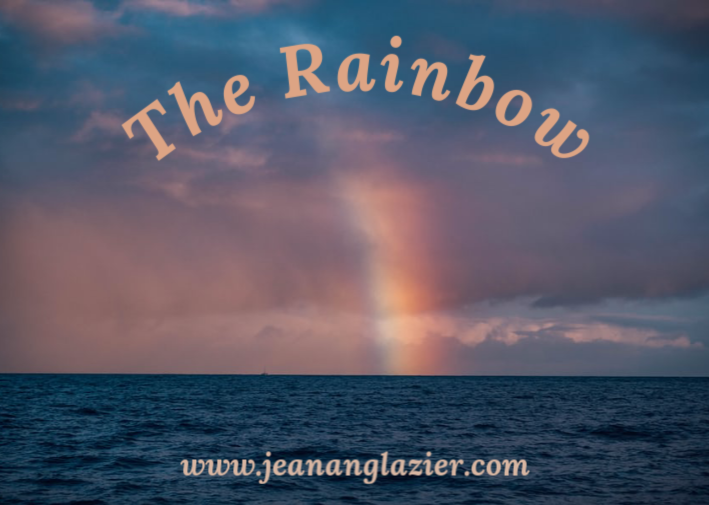